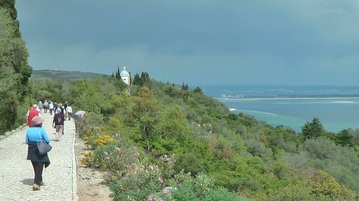 To the Convento da Arrabida (Video 2)
The following day started with a visit to the Castle of Chibanes, a hill fort superbly located on a ridge with wide views over the River Sado estuary and the city of Setubal to the south and Lisbon and the Tagus River to the north. Originally a Neolithic structure and also dating back to the Iron Age it was later rebuilt and extended by the Romans and then occupied and improved by the Moors. This site overlooked some hand excavated burial chambers opened up in a rock face located at Quinta da Anjo, dating from the Calcolithic era.This was followed by a guided tour of the Convento da Arrabida, a restored monastery founded ion 1542 by a Franciscan brother – Martina de Santa Maria, who was unable to enjoy the splendid coastal views being always blindfolded and living in total silence and seclusion in one of the small cells. Previously supported by the Duques de Aveiro the buildings have been owned by the Fundação Oriente since 1990.
The highlight of the tour was a trip to Troia, (a name meaning ‘fishing nets’ rather than any association with the Troy of Ancient Greece), lived up to expectations. An expert guide, who had worked on the actual excavations, was able to give us an illuminating and very interesting tour of the ruins. Only a small part of the huge industrial complex has been exposed where preservation rather than restoration is the current focus. A wealthy settlement active from the 1st until 4th centuries, and where the production of salted fish and garum required a substantial workforce and created huge transport logistics. Depending annually on the availability of fish stocks, mainly sardines, production was periodically restricted by economic downturns within the Roman Empire. This caused the abandonment of some factory areas, followed later by the construction of larger and more productive facilities.. This allowed for burial sites to be established in redundant industrial areas, and the building of perhaps the first Christian church in Portugal over the existing tombs. The Roman ruins are well presented and easily accessed thanks to the financial support of local property developers There are also the remains of residential villas, and a complete bathing complex alongside the largest fish processing facilities in the Roman Empire.
The last day saw us travel back to the Algarve via Mirobriga - the Roman ruins of a small but important trading town dating from the Iron Age and constructed on the foundations of a hill fort. Extensively excavated in the 1950’s the focus is now on the conservation of visible structures which are exposed to the elements. The site is well documented and presented with easy access.