Click on images to view the respective Videos
Monday 25th November, on a cold sunny morning, twenty-four members of the Algarve Archaeological Association tour were off to the south-western Atlantic region of Spain – Jerez, Cadiz and down to Baelo Claudia and Cape Trafalgar. We were based in Jerez at the Casa Grande and Ithaca hotels, conveniently next door to each other.

Before setting off Chris Pollard, who guided the trip, gave a summary of the history of Jerez. Jerez is an ancient city ruled variously by the Phoenicians, Greeks, Romans, Vandals and Moors. In 1250 the King of Castile took the city, but the Moorish style of architecture was maintained. As town trading with the Americas it gained great wealth. During our guided tour we visited the newly reopened Archaeological Museum and the Cathedral followed by an outdoor lunch on the main square.
And not to forget the important sherry production. So a visit to a traditional winery, the privately-run Bodega Tradicion, was in order. The winery has a private collection of Spanish paintings, with a fine El Greco, and other paintings mainly from the Counter-Reformation period.
On Wednesday we were off to Cádiz, fishing and trading port with a huge natural harbour. Any house worth its salt here was built with a lookout tower on top. The British Navy once blockaded French and Spanish fleets massing to invade England here. The city has two cathedrals; a small Romanesque one, beautifully simple, and a larger 18C late baroque one, containing a striking sculpture of the crucified Christ by Luisa Roldan, an immense silver monstrance and a crypt with the tomb of Manuel de Falla.
A visit to the archaeological museum of Cadiz was of great interest, with displays showing archaeological workings and restoration methods. Two huge carved sarcophagi from the 5th Century BC caught my eye, the woman holding a perfume bottle in her hand. Some recently excavated Punic gold jewellery, set with carved precious stones was of exquisite quality. In the fine arts section I particularly loved a Roger van der Weyden painting, and a collection of Zurbarans – extricated by the Guardia Civil from the monastery in Jerez. Hidden in a corner of the museum was an astonishing collection of old string puppets – I longed to see them perform. 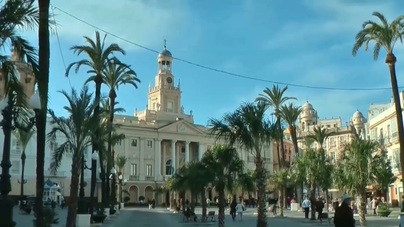 Cadiz (Video 3)
On Thursday, we had the archaeological highlight – a trip to Baelo Claudia, an ancient Roman site dated from 50 B.C. to the end of the 2nd century A.D. after which it declined. Once we had torn ourselves away from reading the gruesome details of the manufacture of ‘garum’ (fermented fish sauce), we wandered through the beautifully situated and laid out archaeological site. This is one of the best Roman sites in Iberia for its presentation of a complete settlement - forum, theatre, baths, houses, villas and fish salting tanks of a large Roman trading settlement.
By this time we were all greatly impressed by the sheer quality of restoration work and displays in all the museums we had visited.
A tapas-stop in the hilltop white town of Vejer de la Frontera was followed by a visit to Cape Trafalgar. A lovely lonely beach with a lighthouse, hordes of kite surfers, and some ghastly, twee cafes (closed). It was here in 1805 that, under Admiral Horatio Nelson, the combined French and Spanish fleets were defeated by bold, novel naval tactics. The resulting British naval supremacy lasted for decades. Chris had chanced to visit on the 200th anniversary of the battle and found several thousand people there, mainly groups from Admiral Nelson pubs, plus the Bishop of Gibraltar with his choir, singing God Save the Queen. The Spanish tactfully stayed away ….
Friday. We strode forth to the Alcázar, another highlight of Jerez. It is an amazing fortified palace from Moorish days, with an orange-tree courtyard, a mosque (inhabited by the inevitable gaggle of Spanish schoolchildren), baths, ramparts and exquisite gardens with fountains. Finally a trip to San Miguel with its beautiful carved altarpiece by Montanez, although a few people skived off for churros and coffee. More tapas, into the bus, and home!
Did I mention potatoes? A major feature of the tour, they were omnipresent and delicious. The final supper at Carbona in Jerez was unforgettable! Roast sirloin of beef blue or pink if cooked further at the table was just great! Wine and sherry with everything. Just great.