Click on images to view the respective Videos
The main theme of the trip was the exploration of the culture of the Iberians who inhabited the region from the 7th – 1st centuries BC, influenced by the Phoenicians, Greeks and Etruscans before being absorbed by the Romans. We visited oppida, fortified hilltop cites ruled by princes, featured near the Guadalquiver river or its tributary, Guadalimar, which rises in the Cazorla mountains – everywhere covered with a profusion of wild flowers. 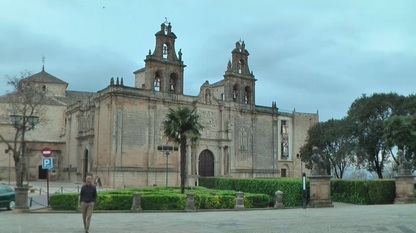 Úbeda (Video 1)
On the way to our destination in Spain we passed by the town of La Luisiana where we visited a Roman bath from the 1st-3rd c. with hypocaust construction visible under the water. It is the longest Roman bath on mainland Spain.
During the trip we stayed in the picturesque town of Úbeda and from there we explored the various towns and sites. Úbeda is a World Heritage Site and is rich in Renaissance buildings, many designed by Andres de Vandelvira. Churches, except the spectacular Capilla del Salvador mausoleum, were built on sites of mosques. The recently discovered Úbeda Synagoga del Agua (medieval date) has a womens’ gallery and underground micve (pool) fed by a natural spring. There is also evidence that it had also been an ancient Neolithic site.
Baeza is another World Heritage Site also with many Renaissance buildings by Vandelvira. Baeza was the Christian capital until the re-conquest of Jaen in 1246 and has a rare Romanesque church.
Following the visit of Baeza we visited the nearby Museum del Azeite at Laguna where there is a garden of the many varieties of olive trees. We saw the ancient process of oil production and were able to taste some of the varieties on sale. Throughout our travels in the province it was evident of the importance of the olive to the local and national economy … the number of trees quoted in this region alone being 65 million – a testimony to the ‘liquid gold’ economy of the Jaen province!
In Jaen we visited the Renaissance cathedral which was uniquely designed by Vandelvira to allow the exhibition of the relic consisting of Veronica’s veil to pilgrim crowds. We also visited the magnificent 11th C 'baños arabes’ (the largest surviving in Spain) located beneath the Palacio de Villardompado.
Near Jaen city, the leading authority on Iberian culture – Prof. Arturo Ruiz, led us to Puente Tablas (7th – 1st C. BC) which is currently being excavated.  Finds include a palace (seat of a major prince), a ceremonial gate, a fertility sanctuary and a solar calendar (using the Serra Magina to the east as reference). There was a defensive wall which was heightened by the Romans and then abandoned after the 2nd Punic War.
Major finds from all the sites are placed in Jaen Archaeological Museum, with Porcuna’s Cerillo Branco statues in the basement. These polished stone sculpted in the Greek tradition are thought to have been part of a tiered monument to a warrior prince and featuring his life through all its rituals. His helmeted head is the logo for the ‘Viaje al tiempo de los Iberos’. The monument was demolished posthumously so due veneration could be given to his successor.
After visiting the interpretation center in Toya showing a video about the Iberians we were able to visit and go into an Iberian tomb. At Castellar museum we saw bronze votive offerings, examples of the 3.000 found at Cueva de la Lobera and prized as an inspiration to Picasso.
On the way back to the Algarve we visited the site at Porcuna where the Cerillo Blanco statues were found in 1975, buried around the perimeter of a necropolis (7th – 2nd C. BC).