A group of AAA members and friends enjoyed a visit to the Roman Villa at Milreu. The visit was guided by Rui Parreira who began the tour by describing the position of Milreu within the Roman landscape, being situated near the Roman road that ran from Ossonoba (Faro) and Beja. Rui explained that the original buildings date from the 2/3rd C. AD but that later in the 3rd C. a major expansion took place which included the construction of baths, indoor and outdoor dining rooms, guest accommodation as well as a public access area. This expansion reflected the increased influence that the owning family had over the region. It seems that the owners were able to finance these major works through their garum production industry on the coast and also through agriculture in the vicinity. The new facilities at the villa were used to entertain and impress visitors.

On display in the visitor’s centre are 3 replicas of busts found during excavations as well as other items related to the construction of the villa. The 4th C temple, of which only part remains on the site, is displayed in model form, together with a plan of the villa showing phases of construction. The original finds form the site, are now in the National Museum in Lisbon and in the Municipal Museum in Faro.

Rui then took us on a tour of the site where he described the many rooms that made up the villa. A good number of the mosaics have been removed or had been damaged during antiquity after the villa went out of use. But those still visible give an indication as to how luxurious the original building must have been. One in particular is on the inside of what would have been a water tank and represents fish swimming. It is believed that the design is North African. Another long mosaic in a ‘corridor’ that connected guest rooms is also of nautical design and shows fish, squid and shell fish.
Water features were also part of the impressive interior design, with the remains of fountains and water spouts being still visible.

The industrial role of the villa is reflected in the remains that once contained olive oil and wine presses. At the edge of the site is a medieval Islamic house beneath which has been found more evidence of the industrial processes. Rui’s tour was not only instructive but highly entertaining and we thank him very much for his time.
More information about Milreu on: imprompto.blogspot.com/projecto Milreu 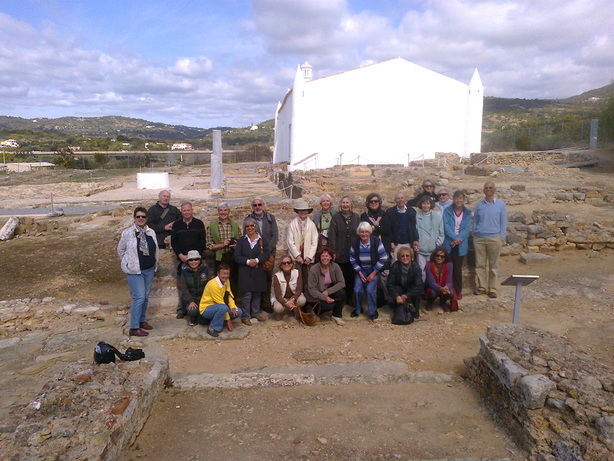