2019 April :  Trip to Amarante in the North of Portugal

Every year the AAA organises visits to archaeological and historic sites within Portugal and Spain. This April we travelled north to the area around Amarante which was our base for the start of the tour. The first day was spent travelling to our hotel and in the evening we enjoyed an excellent dinner at the restaurant Pobre Tolo in the town.
Also during the Roman period a road was built leading to the top of the site where there was an open space likely to have been used as a 'forum'.Close by we saw the remains of the necropolis and in the visitors centre there is a small display of artifacts as well as a model and aerial photographs of the site.Most of the archaeological finds are now held in the museum in Penafiel.
After free time for lunch we all met up again and drove to Freixo, a pretty medieval village of stone buildings. Here in 1882, a granite block was found on the site of a well. On it was an inscription referring to a place called 'Toncobriga'....a town mentioned by Ptolemy as being situated on a hill (-briga) and set between the Douro and Minha. The village of Freixo is now home to the Professional School of Archaeology and one of their staff gave the group a very interesting and well informed tour of the fabulous site...explaining that the discovery of the granite block and subsequent excavations have confirmed this assignment the site now known as 'Tongobriga'... possibly built at the time of the Emperor Augustus, although evidence of pre-Roman occupation has also been found there. The Roman remains here are very impressive ..sections of town walls, bath house with its
Excavation, research and study continue at Tongobriga...to conserve the site, provide courses in archaeology and conservation as well as presenting the monument to the general public and groups such as the AAA. 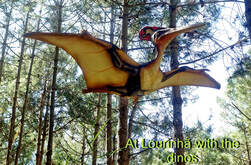 On the way back to the Algarve we visited the new Dino Parque near to Lourinha. A few years ago the AAA visited the museum in the town and met Octávio Mateus who is a renowned paeleoantologist. At that time we also visited his department at the Nova University in Lisbon. Whilst there he told us about the project to open a park to display examples of prehistoric life discovered in Portugal. We were met by Octávio's brother, Simão, who took us into the workshop/laboratory where one of the students was busily chipping away at a huge 'rock' to extract tiny pieces of fossilized 'dino eggs'. Simão described the work they do at the parque..to conserve, study and present the specimens to the general public. We then moved on to the exhibition area where some of Octávio's discoveries are displayed with excellent explanation panels. Outside in the parque over 150 life-size dinosaur models are placed in the woods..there are 5 different trails and recently the Sea Monsters trail has been added.
All these models were built in Germany and reassembled on site. Children have a great fascination for dinosaurs and there were many groups of youngsters enjoying their day out! For them too there is an activity area where they can 'discover' their own prehistoric monster! 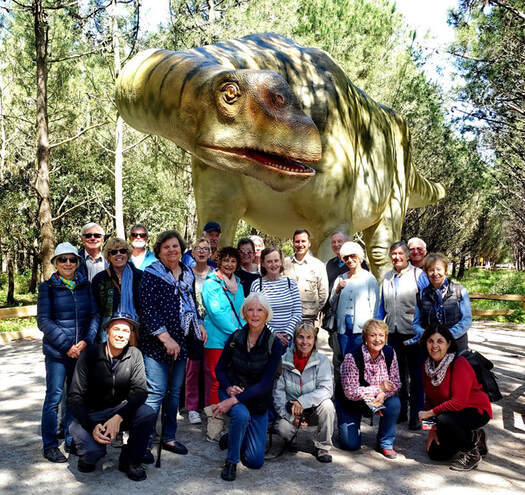 For our excursions we like to cover a variety of sites and places of interest as well as enjoyable meals that appeal to everyone who joins us.....and this time it certainly ticked all the boxes! Our thanks go to all those who organised the programme, the hotels, restaurants and to our driver, Florentino.