‘I am not your correspondent.’
Gertrude Bell and the British intelligence network in the Middle East
during the First World War 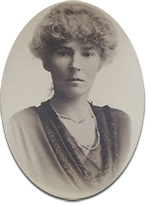 Gertrude
When Gertrude Bell set out for Arabia in January 1914, to ‘trace the frontier line of the Limes of the Later Roman Empire’, she also agreed to provide the Foreign Office with a detailed account of her travels. Her experience became truly invaluable when the war broke out in June.

In the Middle East, intelligence was gathered in a rather erratic manner, with a multitude of agents reporting to just as many departments. From 1915, Bell was one of these very independent agents, reporting on the Arab provinces of the Ottoman Empire.

When an effort was made, in 1916, to harmonise British intelligence in the region, Bell joined the Arab Bureau and, through her reports and correspondence, became one of these archaeologists and intellectuals who turned scholarship into a deadly weapon.


Dr Juliette Desplat is the Head of Modern Overseas, Intelligence and Security Records
in the Collections Expertise & Engagement Department
at The National Archives, Kew.